Sea urchins and sand dollars are both echinoderms with hard outer tests or shells. Unlike starfish, there is no ambulacral groove, which in starfish appears as slits on the bottom of the animal. Sea urchin and sand dollar shells have a number of moveable spines, and the organisms control their movements through the use of a water vascular system. This amazing water-pressure powered series of miniature muscular appendages can both move the spines and help bring food particles to the mouth. Both creatures rely on this system, but they use it very differently.

Below is an image of a sea urchin, with its large and powerful spines. Sea urchins use their spines for defense. The spines in sea urchins can be hollow or solid, depending on the species. A few species of urchin have venomous spines which can be potentially harmful, even to large animals like us! 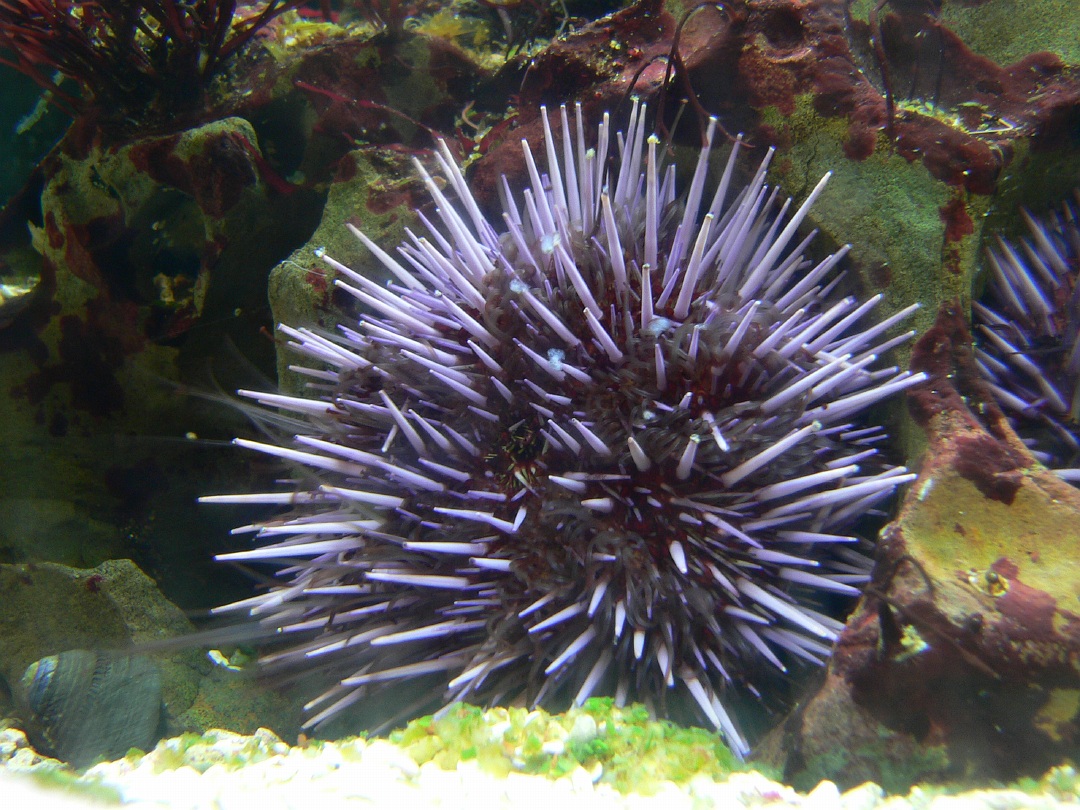 The next image is of a sand dollar. The difference between sea urchins and sand dollars is that the spines found on sand dollars are much smaller. As you can see below, these spines are extremely tiny. Thus, they are likely not very good defensive weapons. Instead, the sand dollar uses the spines to pass sand and other sediments over the test, allowing the organisms to bury itself and move small food particles to the mouth. 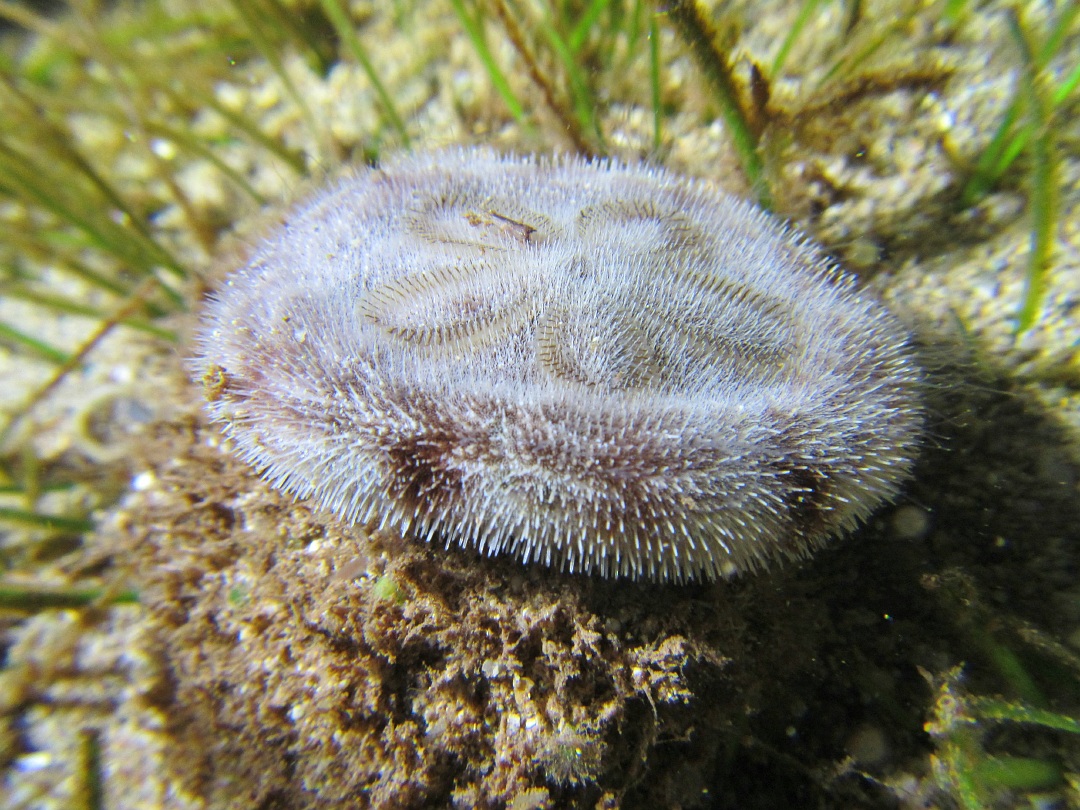 Besides these small details, the internal anatomy of sea urchins and sand dollars is strikingly similar. Both organisms have a solid test covering the internal organs, with small water canals which help to channel food to their mouth. They both have Aristotle’s lantern mouthparts, grinding food up before it reaches a simple gut. The location of the anus can be different, depending on the species. In sand dollars it can sometimes be on the side or close to the mouth. In sea urchins, it is often found directly on top of the organism opposite from the mouth. Both sea urchins and sand dollars have a number of internal gonads, which produce eggs or sperm.

In both sea urchins and sand dollars, there is a historically significant physiological structure used for feeding. Aristotle’s Lantern is the name of the mouthparts of these organisms, which have a radially symmetrical complex of muscles and sharp teeth. This structure was first identified by Aristotle, as part of his attempts to classify known living organisms. Because of these mouthpieces, he was able to classify sea urchins and sand dollars together. Below is a picture of the mouth of a sea urchin, showing the sharp teeth of Aristotle’s lantern. 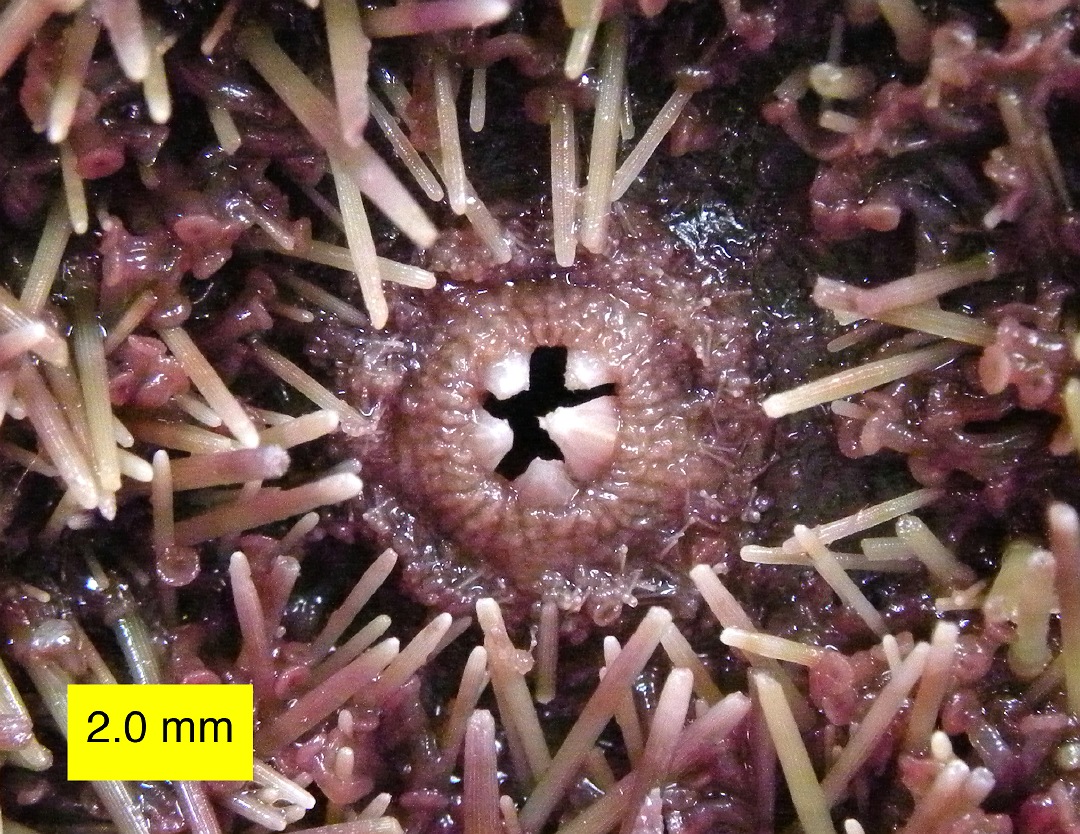 Though both sea urchins and sand dollars have these mouthparts, they use them in surprisingly different ways. Sea urchins are one of nature’s most efficient algae eating machines. Some urchins will scour the rocks of the bottom, scraping algae off with their teeth. These urchins can even be responsible for eliminating entire kelp forests. Their strong teeth can saw through the holdfast of the kelp, allowing it to float away or wash ashore and die. An army of these urchins, when no starfish or sea otters are there to stop them, can easily turn a kelp forest into an urchin barren.

Other urchins are more like farmers. They pick a rocky outcrop to stash away in. In a small hole, they allow algae to grow on the walls. As it grows thick, they eat it away. By protecting the entrance to their holes with sharp and dangerous spines, the urchins are the only organisms with access to the algae. If they grow too large for the protected spot, they will have to leave and find a new place.

Sand dollars operate much differently. Their tiny spines cannot be used defensively. Instead, the spines are used as an incredibly efficient digging tool. The spines move rapidly, transferring sand over the shell of the organism. The spines and muscular podia on the bottom of the urchin move sand out and away. The result is that this solid, limbless sand dollar can easily bury itself in soft or sandy environments.

Sand dollars function as detritus feeders, picking out small pieces of food among the sand that they eat. Among various species of sand dollar, there is a high degree of variability in how deep they go and exactly what they eat. Some sand dollars prefer to be buried deep, where the chance of predation goes way down. Others have fewer natural predators and prefer to remain partially exposed. This allows them to also filter algae from the water column as an extra source of food.

There are likely very few differences between the reproduction methods of sea urchins compared to sand dollars. In general, both organisms contain a number of gonads, which produce gametes. Some species are hermaphroditic, producing gametes of both sexes. Other species work on a male/female system, producing only one kind of egg.

Either way, the few documented cases of known sea urchin and sand dollar reproduction is a form of free-spawning. In this form of sexual reproduction, eggs and sperm and cast into the water column. When they meet, they form a tiny zygote, which will develop into a small larva. These small creatures have the ability to swim and will find an appropriate place on the bottom to begin their development. They start by forming a test, complete with a few spines. As they grow, the test expands with them and they add new spinal plates. Eventually, they will be a much larger creature with more spikes than you can count.

The relationships between sea urchins and sand dollars are complicated, and not fully understood. As part of the phylum Echinodermata, these organisms are actually closely related to humans. Well, not super close, but much closer than some other species.

Echinoderms are fundamentally deuterostome animals. This means that their development proceeds in a very specific way: through spiral cleavage. We are also deuterostomes, meaning that at some point in evolutionary history we shared a common ancestor with both sea urchins and sand dollars. In fact, scientists have been able to pinpoint that our radiation likely separated from the echinoderm phylum around 526 million years ago.

That may sound like a long time, but out of the 3,800,000,000 years that life has likely existed, this practically makes the echinoderms our cousins. Compared to earthworms, insects, or other invertebrates, we are much more closely related to the humble sand dollar. These organisms are protostomes and rely on a slightly different form of radial cleavage as their embryo develops.

The differences between sea urchins and sand dollars are not many, but allow you to easily tell the two organisms apart. The large and visible spines of the sea urchin will be a dead giveaway. Sometimes, only the test of these organisms is found after they have died. A sand dollar test is flattened, like a disc. The spines will be gone, rubbed away by the sand. A sea urchin test will be like a small globe, and small holes can be seen where the spines used to stick out. Other than those superficial traits, sea urchins and sand dollars are actually very similar.