The fossils of small segmented animals had been known to humans for centuries, but for most of that time, no one was really sure what they actually were. Their durable armored exoskeleton and habit of moulting ensured that they were easily fossilized and discovered by people hundreds of millions of years later. Some Native American people used Elrathia fossils as amulets and back in 1679 the first scientist to study Ogygiocarella thought it was a flatfish skeleton.

Throughout the 18th century, many new fossil species were discovered, confounding scientists about their identities. Their segmented bodies and compound eyes reminded scientists of insects and crustaceans, offering clues to their true identity. By the dawn of the 19th century, these fossils, now known as trilobites, were considered to be quite like crustaceans, but not exactly. They were unique among known animals with no living examples.

Over time it became apparent to paleontologists that the trilobites were true masters of the Earth’s primordial oceans, reigning for hundreds of millions of years. More than 25,000 fossil species have been named from all over the world, each one with unique anatomical adaptations for a particular role in the environment, from the seafloor to the surf, and everywhere in between.

Although trilobites are common fossils, they weren’t found in every rock those early “gentleman scientists” looked at. Like all fossils, trilobites are only found in sedimentary rocks, but it’s more specific than that. Trilobites were strictly marine and lived only in the Paleozoic Era, 541-252 million years ago.

Their uniqueness, diversity, and absence from the modern world provided early support for the once radical concepts of extinction, evolution, and plate tectonics. Indeed, their ubiquitous nature has allowed scientist to directly observe the pace of evolutionary change in the distant past, both in normal times, and immediately after extinctions.

The oldest definitive trilobite fossils are from a group called the Redlichiida, known from the Early Cambrian Period. Their segmented bodies were covered in thin armor and their heads lacked certain head sutures that characterize later trilobites. These early forms likely scuttled across the sea floor in search of food.

But trilobites weren’t limited to the sandy bottom. Throughout their history several species modified their legs and gills to help them swim, and these swimming forms came in many varieties. The bulbous forehead of Actinopeltis may have been used by the animals as a flotation device. Lonchodomashad a head shaped like a stealth bomber and may have swum like a ray. Carolinites is one of the most unusual trilobites, using its giant eyes to help hunt while swimming upside-down.

As the Paleozoic progressed trilobites pushed their limits, moving into alien and hostile environments. Trace fossils of tunnels, called Cruziana, were formed by trilobites digging under the surface. There are footprints of trilobites walking on the sandy upper beach of an ancient shore at low tide. They were among the first animals to ever venture out of the seas, even if it was just for a few minutes. At the other extreme some species ventured into the deep sea, becoming completely blind where daylight never penetrates.

They are famously segmented and are part of a huge lineage of animals with segmented legs and bodies known as the arthropods. That lineage also includes insects, crustaceans, millipedes, spiders, scorpions, and many others. Trilobites may look a lot like some living arthropods like horseshoe crabs or pill bugs, but they are only distantly related to them, and were one of the earliest arthropod groups to emerge.

Although they have a lot of anatomical diversity, trilobites all follow the same basic body plan. They’re divided into three lobes; the left, right, and center. They also have three main body sections, a head, several torso segments, and a tail, with some having a long tail spine. These features make them easy to identify for ameteur fossil hunters.

Most trilobites had excellent vision, and may have relied on sight in social communication, hunting, and evasion. Almost all had paired compound eyes on the top of their heads made of dozens, and sometimes hundreds or thousands of small lenses packed into an eye, like modern insects. Unlike insects, the lenses were made from the mineral calcite, and were so sophisticated, they may have been free from distortions.

The earliest trilobite eyes are known as holochroal and had densely packed lenses, with a single corneal layer covering the whole eye. The vast majority of trilobites have holochroal eyes, but not all of them. A lineage of trilobites known as the phacopids evolved a modified type of compound eye called schizochroal, where each calcite lens is separated from its neighbors by exoskeletal tissue and each has an individual cornea. Schizochroal eyes resemble the eyes of young trilobites with holochroal eyes, and may have been the result of paedomorphosis, the retention of juvenile features in adult animals.

The most basic form of compound eye in trilobites are simple crescent shaped eyes, but a huge variety of different forms are seen in fossils. In some species like Erbenochile, the lenses are mounted on tall turrets giving them a full 360 degrees of vision. In others like Miraspis, the compound eyes are mounted on immobile stalks, possibly used like periscopes while the animal hid beneath the sand.

The fossils we find are normally just the upper halves of trilobites, but they weren’t heroes in a half-shell. Their upper parts were strengthened with calcite like the shells of crustaceans, but their legs and bellies were armored only with stiff proteins that usually decomposed before fossilizing. Rare specimens tell the rest of the story, with curving antennae emerging from under the head, and one set of legs and gills for each torso segment. Many of those specimens are of a genus called Triarthrusand were fossilized with pyrite, also known as “fool’s gold.” They are the brilliant metallic reflections of a lost world.;

Most trilobite fossils, however, are not golden, but instead black or brown. Perhaps because of this, most illustrations of living trilobites show them as black or brown inverted boot prints. This isn’t necessarily sound reasoning, because the color of fossils is largely based on their mineral content. Fossil crustaceans like crabs and lobsters are often black and brown too, but we know from living species that they’re almost never solid black, but come in all manner of colors and patterns.

Specimens of a trilobite called Eldredgeops even had freckles of calcite crystals on their back, rare evidence of a color pattern that the animal sported in life. The spots might have been used as a form of camouflage, blending in with the sandy bottoms to avoid predators.

Trilobites had mouths on the bottom of their heads and like their insect and crustacean cousins had numerous complex mouthparts to help them eat. Like insects and crustaceans, they also had diverse diets. Some ate algae, while others, like Scotoharpes and kin, may have been specialized filter feeders. Many ate dung and detritus while others were carnivores, some even feeding on smaller trilobites. In fact, many trilobites were covered in defensive spines and barbs as a way to protect themselves from being eaten. Others, like Phacops, evolved a defense mechanism later copied by pill bugs and armadillos: rolling into a ball. Hundred specimens of enrolled trilobites record their final fight for survival. 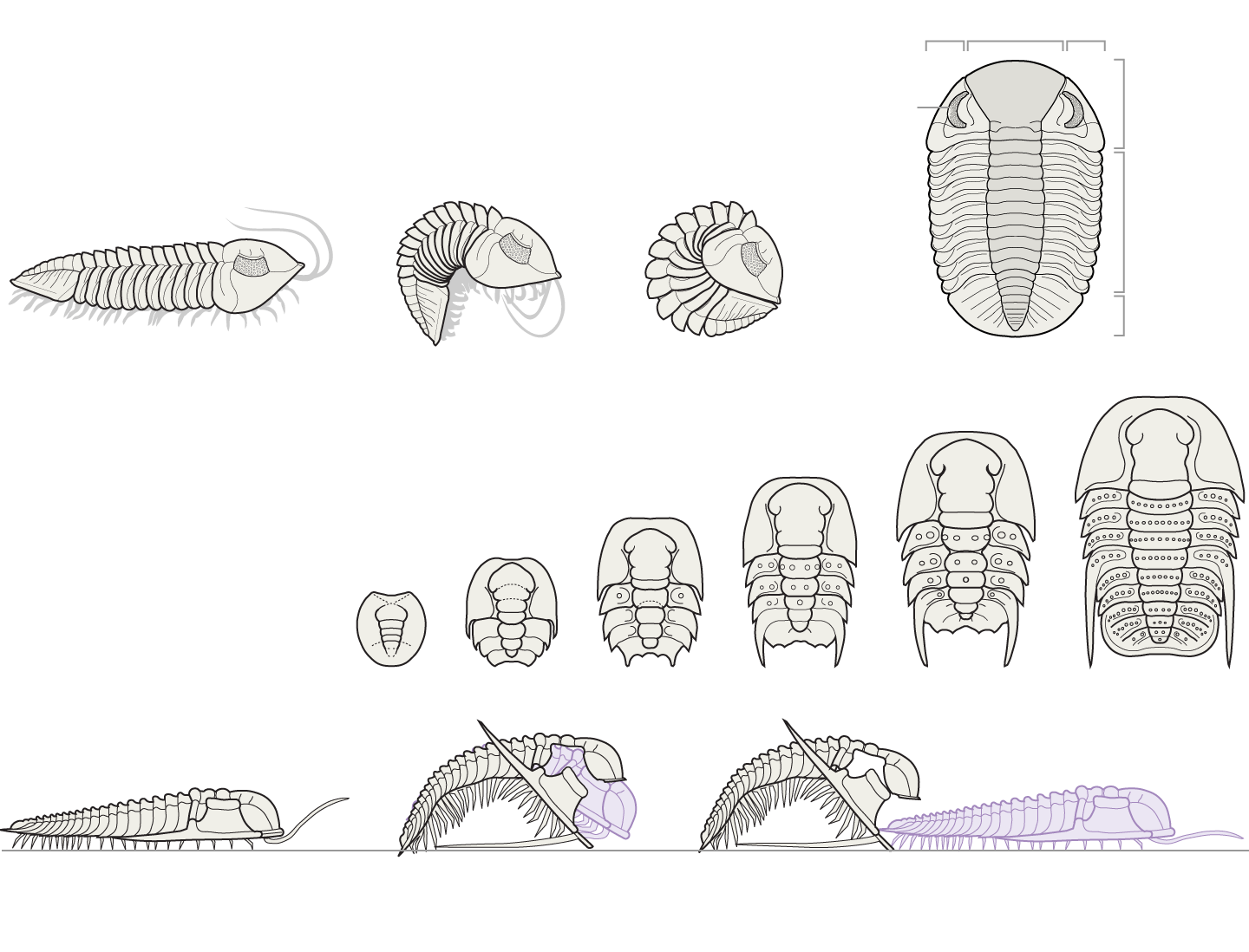 Through the nearly 300 million years of the Paleozoic Era, trilobites were hit by multiple mass extinctions, and in one case they were almost wiped out with only one genus making it through. They finally fell victim to extinction 252 million years ago at the end of the Permian Period, in a mass extinction commonly called the Great Dying. This extinction is linked to huge volcanoes in Siberia whose eruptions burnt vast coalfields. The CO2 dumped into the atmosphere from the volcanoes, and especially the coal, led to rapid global warming and ocean acidification. This proved too much for the trilobites to survive and they, as well as 90% of marine animal species, disappeared.

In their time, the humble trilobites filled roles today occupied by crustaceans. They didn’t just fill in for the crabs scuttling long the bottom, but shrimp swimming in the water and digging in the sand, and even filling the roles of many living fish like catfish and small sharks.

The highly mobile, visually oriented, and social animals came in all kinds of shapes and sizes, behaviors, and surely colors and color patterns. Their rarely fossilized antennae and legs emerged from under their shield-like shells, and allowed them to move, interact, and behave like fully competent creatures.

If we were to travel back in time to the seas of the Paleozoic Era, we’d meet our heroes on familiar reefs and intertidal beaches, where they’d be joined by a largely unfamiliar cast of characters. “Forests” of stemmed starfish relatives called crinoids, lived just below the waves, and the seas were full of shelled relatives of squid and octopuses. The reefs themselves were built by encrusting algae and completely extinct types of coral.

And on those reefs were hundreds of diverse species of trilobites; crawling, digging, swimming; eating, hiding, raising young; living and dying. Earth of the distant past wasn’t inhabited by aliens doing alien things, but by normal animals doing wonderful things.

Special thanks are owed to paleontologist Dave Rudkin of the Royal Ontario Museum in research and preparation of the illustration. 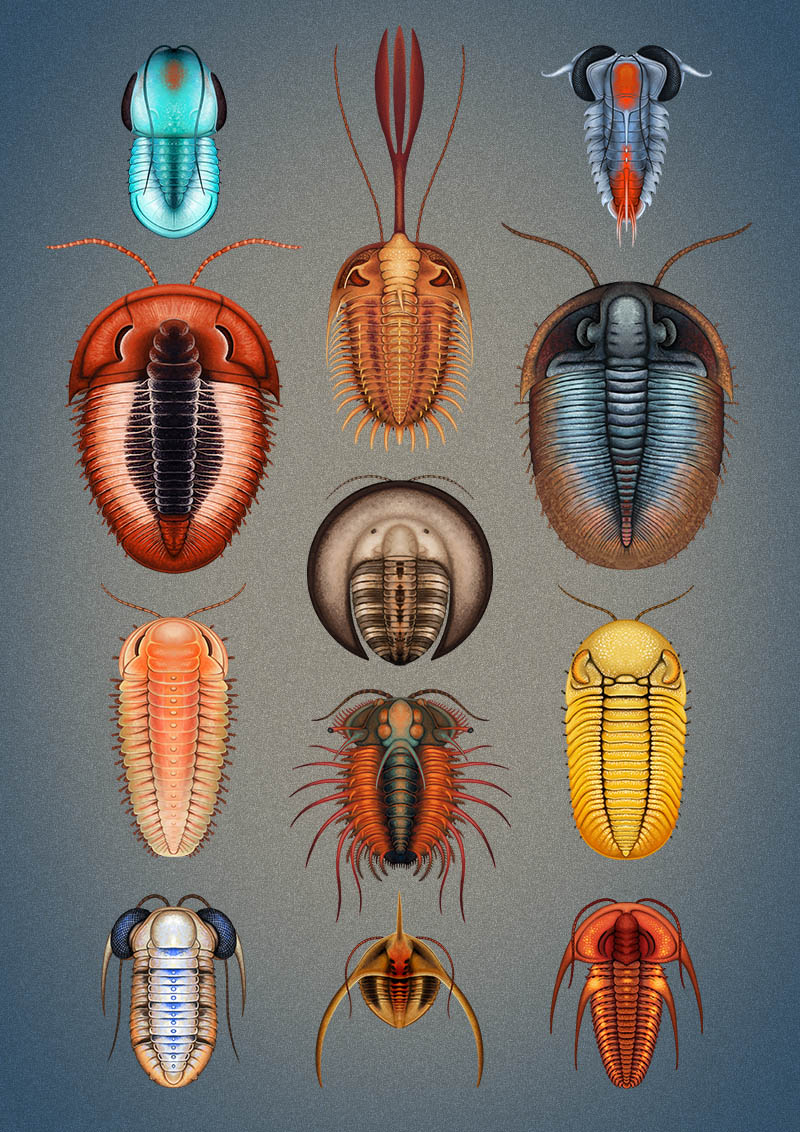 Cardiff Curator (@CardiffCurator). “U is for Utah, USA. Native Americans in this area used Elrathia trilobites as amulets to protect against disease and injury #TrilobiteTuesday #Alphabet” 27 Feb 2018, 12:15 AM. Tweet.

Richard Fortey. 2004. “The Lifestyles of the Trilobites.” American Scientist, Volume 92.