Hornbills are medium- to large-sized, large-billed, long-tailed birds of tropical forests, savannas, and grasslands, comprising the family Bucerotidae. The 62 species of hornbills are distributed widely through the tropical regions of Africa and Asia. Most hornbills live in forests, and nest in holes in trees, while the species of open habitats nest in cavities in hollow trees or in holes in cliffs. 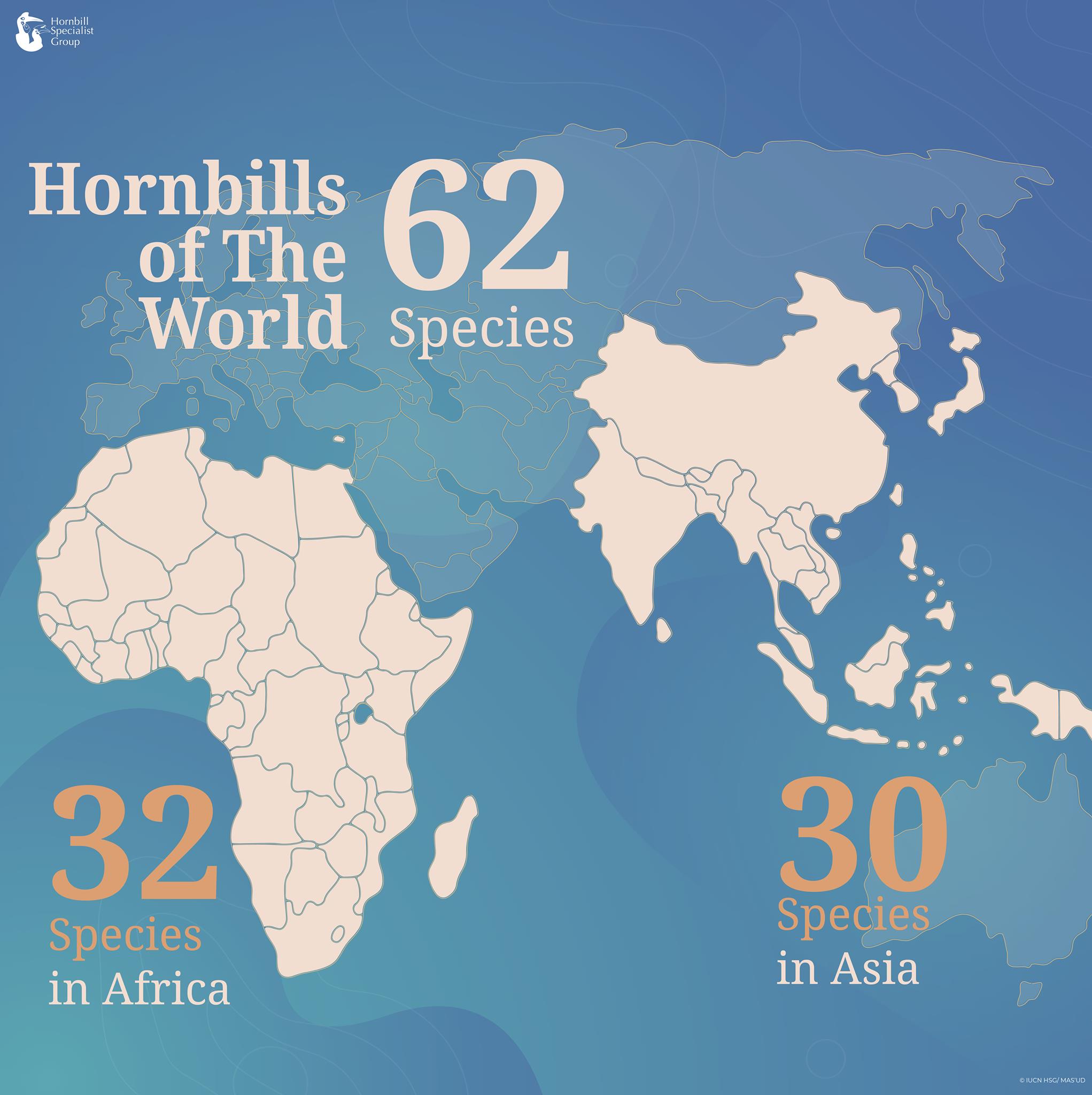 Not all hornbills are already fully described as in the last years several sub species were identiefied.

Most hornbills are brightly colored, especially around the head and bill. The smallest hornbill is the 15 in (38 cm) long, red-billed dwarf hornbill (Tockus camurus) of West Africa, while the largest species are the 4 ft (1.2 m) long great hornbill (Buceros bicornis) of India and Southeast Asia, and the 5 ft (1.6 m) long helmeted hornbill (Rhinoplax vigil) of Malaysia and Indonesia.

The most distinctive characteristic of hornbills is their very unusual beak, which has a complex structure known as a casque sitting on top of the upper mandible. Remarkably, the specific function of the casque has not yet been discovered. Some species have seemingly enormous casques, as is the case of the rhinoceros hornbill (Buceros rhinoceros) of Malaysia and Indonesia, and the black-casqued hornbill (Ceratogymna atrata) of West Africa. Although bulky, the casque is light, being filled with a sponge-like matrix that is mostly air cavities. An exception is the helmeted hornbill of Southeast Asia, which has a solid casque, known as hornbill ivory. This is a valuable natural commodity in Southeast Asia and China. 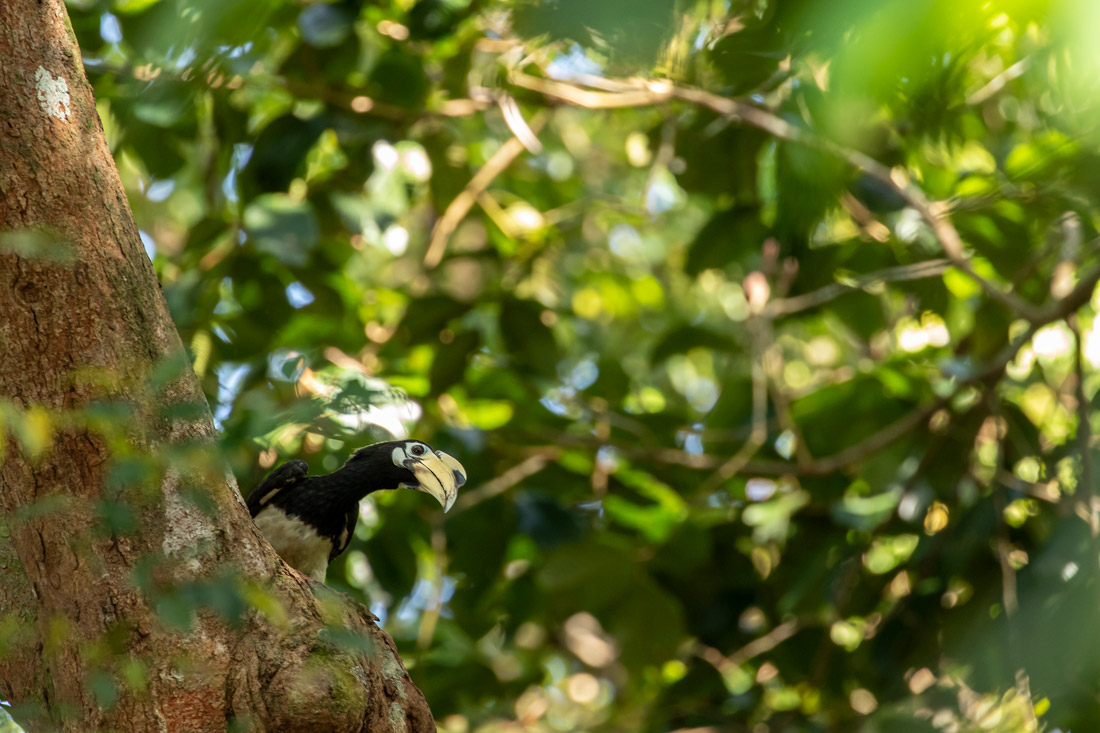 Hornbills are rather conspicuous birds, because they make a wide range of loud noises, and usually fly in flocks, especially during the non-breeding season.

Most hornbills are omnivorous, typically depending on fruit as the major component of their diet. However, most hornbills are opportunistic predators, and will readily eat small animals if they can catch them. Some horn-bills commonly feed upon relatively dangerous animals, such as poisonous snakes and scorpions. Hornbills handle their prey with great skill, using the very tip of their seemingly ungainly, but in fact highly dexterous, bill. Hornbills are also adept at manipulating and peeling bulky fruit, again using their large bill.

Hornbills have a remarkable breeding biology. The female of almost all species is sealed into the nesting chamber in the tree during the breeding season. She remains there, laying and brooding her eggs and hatched young, with only a narrow slit-like opening to the outside. The female builds a wall across the entrance to the nesting cavity using her excrement, which cures to a very hard consistency. Sometimes the male bird assists with the building of this wall, using moist clay. Presumably, the walled-in female and nestlings are kept relatively safe from nest predators. However, both she and the developing nestlings must be fed faithfully by the male. In some species, the female breaks out of the nesting cavity once the chicks are partially grown. The cavity is then re-walled, and the female assists the male in gathering food for the hungry young hornbills.

Most cavity-nesting birds keep the nest clean by routinely disposing the fecal sacs of the young birds outside of the nest. Obviously, the walled-in hornbills cannot do this. The female deals with her individual sanitary problem by defecating at high speed through the small, slit-like opening in the wall, and as the young birds grow they also learn to do this. Other detritus is left for scavenging beetles, ants, and other insects to clean up.

Hornbills are relatively large birds, and they are sometimes hunted by humans as food. The helmeted hornbill is also hunted specifically for its valuable horn-bill ivory. Hornbills are also commonly caught and kept in captivity as interesting pets. Overhunting for any of these purposes can easily cause local depletions of wild hornbill populations in the vicinity of human settlements. These birds also suffer as their tropical forest habitats are converted to agriculture or other purposes. For these reasons, the populations of all species of hornbills are decreasing rapidly, and many species are endangered.

NOTE on www.naturalhistorycuriosities.com we only have skulls (and other objects) for sale of animals that were not caught in the wild or endangered. None of the animals are CITES listed!

birdsciteshornbills
Previous reading
Cicadas and some cool facts
Next reading
Is it possible that the Megalodon still lurks on the ocean floor?