The name “aquamarine” is derived from two Latin words: aqua, meaning “water,” and marina, meaning “of the sea.”

Aquamarine minerals and gemstones are a variety of beryl. Its color is blue to greenish blue or pale blue. It comes in shapes of rough pieces to beautiful hexagon crystal both. The Crystals can be quite large.

The elements in Aquamarine are Beryllium, Aluminum, Silicate. Beryl can have a large variety of colors whereas the blue one is called Aquamarine. The hardness of Aquamarine is 7.5 to 8.

Green aquamarine can be heated at very high temperature in order to get its blue color.

This aquamarine was found in the region of Skardu Pakistan and It has a size of almost two feet and a weight of 60 pounds. 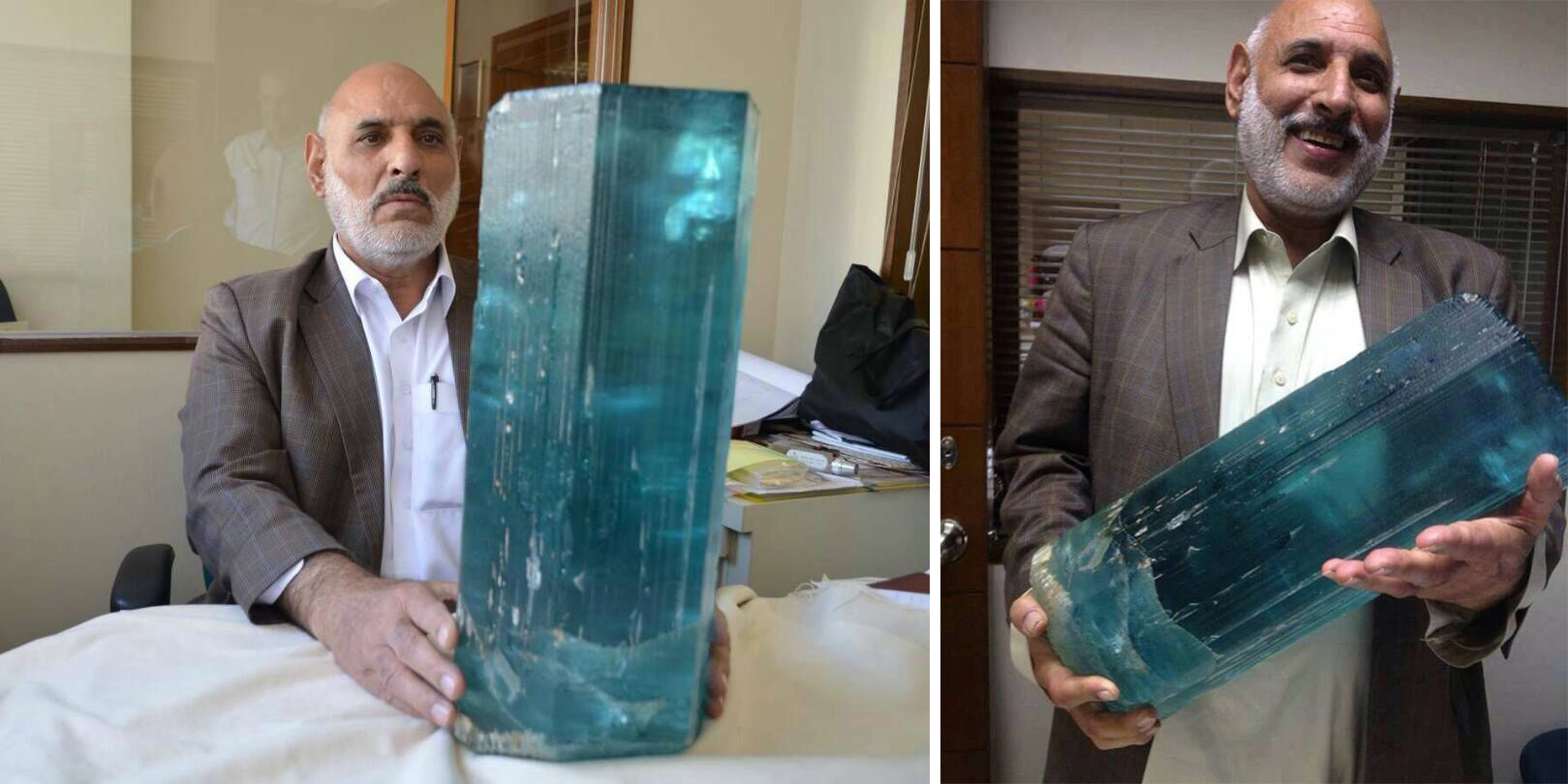 The piece was designed and cut by gem artist Bernd Munsteiner. It stands 14 inches tall and weighs 10,363 carats — or nearly 5 pounds.

It’s difficult to place a value on the gem, though it was offered to the Smithsonian in the late 1990s for $7 million to $10 million. 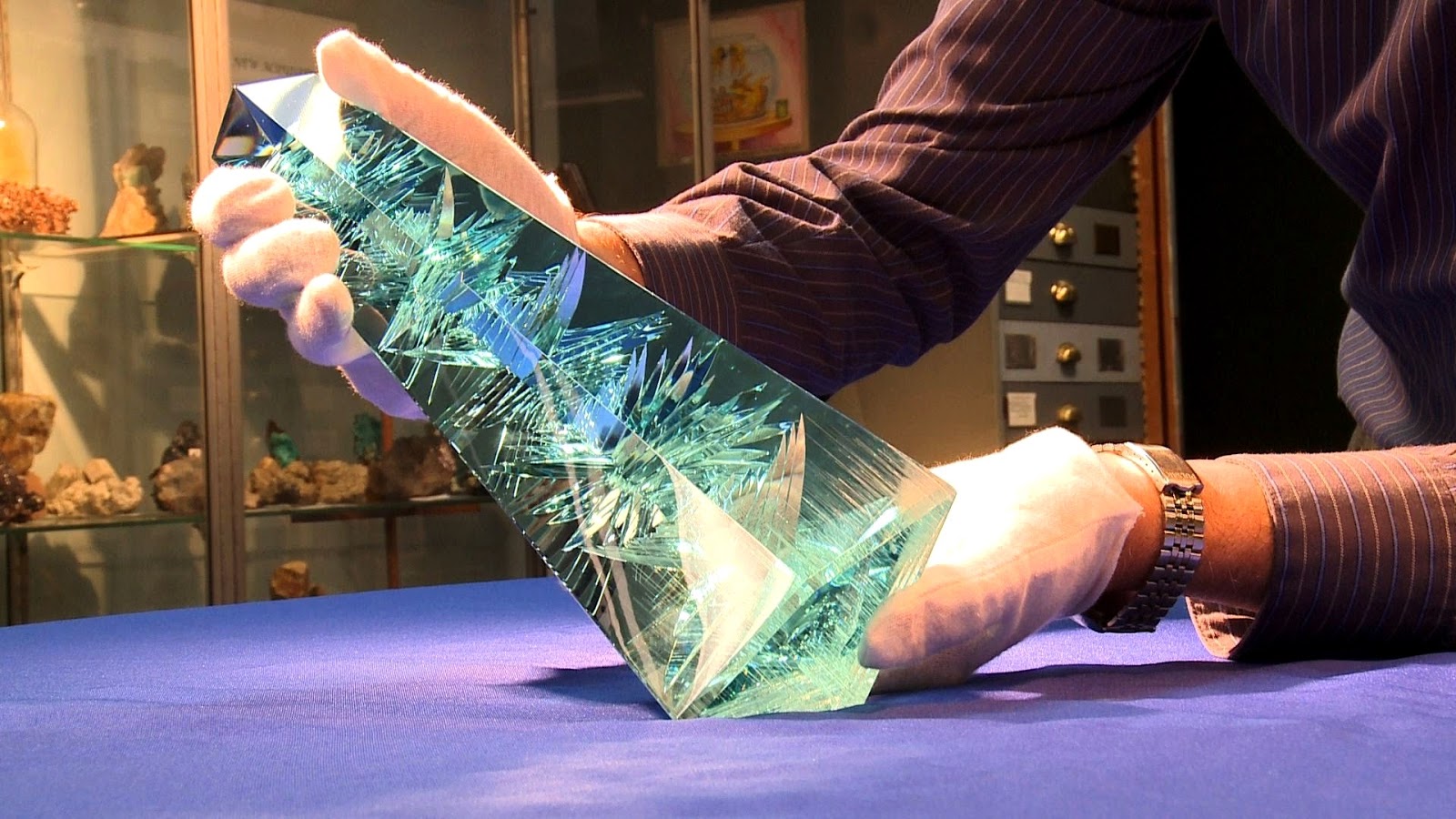 How Aquamarine get its color?

How aquamarine gemstones and minerals get their color? Aquamarine is a variety of beryl. The presence of iron turns the Beryl Blue / Green blue making it Aquamarine.

Locations of Aquamarine in the world

Aquamarine is found mostly in following location of the world.

What is the history of Aquamarine?

Historically evidence locates first use of aquamarine by the Romans and Greek people around the 480 to 300 BC. Since the 7th century, aquamarine gained popularity. Usually, ancient sailors used to wear it or keep it with them. They used to believe that it kept them strong, fearless and protected them from forthcoming problems, disasters or wrath of oceans.

The Romans in their period, used it for the first time into jewelry. They believed that carving different figures in aquamarine will help them in protecting them from enemies. They used to give it as a gift to the bridegrooms, sailors and on many other occasions. During the Medieval era, the people believed that Aquamarine could awaken love feelings. It was said that it increases young age and intelligence and gives courage and happiness.

In older documents, aquamarine discovery first took place in 1723 in the Adun-Chalon Mountains in Siberia. Though deposits were abundant, not much later it quickly turned into a major mining site and the peak production/mining took place around 1796. It produced almost 70 Kg gemstone quality aquamarine during that year.

What are geological and geographical occurrences of Aquamarine?

In order to understand aquamarine, one must be aware of beryl that how it is formed and appear. Beryl is usually found in granitic pegmatites. Pegmatites are large structures comprising of interlocking minerals and rocks.

A natural geological process causes the appearance of deposits towards the surface area. From these pegmatites, you can locate the presence of deposits most of the time. The presence of iron in beryl will turn beryl to aquamarine during crystallization process. In case of little or other impurities are there during the process, the crystals will appear in other forms such as emerald or morganite.

Definitely one of our passions, cypraea or cowries