Butterflies are among the most colorful and charismatic of insects, and their extraordinary diversity has been the focus of studies by amateur naturalists and professional entomologists for over two centuries. Butterflies have long been model organisms for basic biological research in the fields of behavior, population genetics, and systematics. More recently, studies of butterfly life cycles in tropical rain forests have resulted in a cottage industry: “farms” or “ranches” where live butterflies are reared under controlled conditions to provide a supply of pupae for exhibits of live insects. Live butterfly pupae are sold to museums and zoos for public education and enjoyment such as in the Academy of Natural Sciences of Drexel University’s exhibit featuring tropical butterflies.

How do butterfly ranches and farms operate? One pioneering project developed by the government of Papua New Guinea encouraged farmers to take part in commercial exploitation of a renewable resource — insects. In the 1970s, government officials became aware that expatriates involved in the commercial collection of insects were enlisting the aid of local farmers who lived adjacent to rainforest habitats. The farmers were paid a small fraction of the market value of the specimens. The government was determined to change this state of affairs to ensure the locals received a larger share of the profit. So the expatriates were expelled from the country, and the Insect Farming and Trading Agency was born. Most of the trade managed by the IFTA consists of wild-caught insects from rain forests.

In the case of wild-caught butterflies, the majority captured by IFTA collectors are males due to behavioral differences between the sexes. (Males aggregate along river banks to imbibe sodium and are easier to capture.) Because males mate more than once, as long as the harvest of wild populations has the expected skewed sex ratio, the impact of collecting is minimal relative to naturally occurring predation. Now the IFTA controls all trade in insect specimens and has fostered a program of butterfly ranching to encourage protection of remnant rainforest habitats in the vicinity of a farm or village. 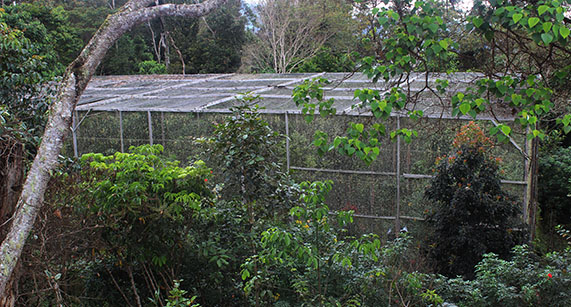 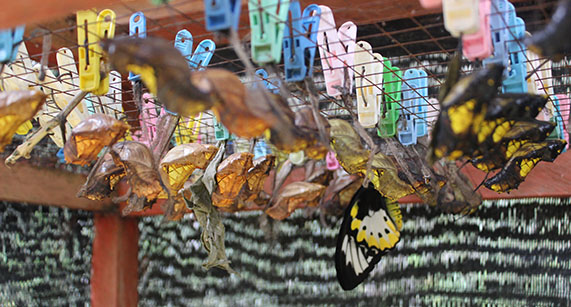 The basic principle behind butterfly ranching is diversification of crops in a small garden plot to include the host-plants on which caterpillars feed. Only a small fraction of these larval host-plants are known to science. The main “research and development” activity of butterfly ranchers is discovering unknown host-plants through careful observation of egg-laying female butterflies. Once the host of a particular species is known, it can be cultivated in the garden near the edge of the rain forest to attract egg-laying females. If the natural concentration of a particular plant species is one per square mile of rain forest, and a farmer plants several dozen of the species, the result is a dense concentration of caterpillars in a short time. Butterfly ranching thus involves artificial manipulation of the natural density of caterpillar host-plants.

Additionally, flowering plants, such as Hibiscus and Lantana, attract female butterflies, which need the nectar to renew their energy reserves after a bout of egg-laying. After the caterpillars mature, they are harvested and removed to cages for pupation. The IFTA sends out advisors to instruct villagers in butterfly husbandry techniques. Many farmers have learned that they can sell butterflies to supplement their income if they protect the remnant patches of rain forest that form a reservoir for this renewable resource.

Butterfly ranching is a passive approach relative to farming, in which enclosures (ranging from large cages to sleeves of fine netting) are used to protect butterflies from natural enemies during all stages of their life cycle. Parasitic wasps that attack butterflies in their vulnerable immature stages are the most dangerous enemies. Butterfly farming (pioneered by Malaysian entomologist David Goh in the 1980s) is more labor-intensive, but has resulted in large-scale production of parasite-free pupae for export. Goh’s Penang Butterfly Farm on the island of Penang in Malaysia is now one of the leading suppliers to live butterfly exhibits. Many of the species to be exhibited in the Academy’s Butterflies are the result of years of study of host-plants in the rain forests of Malaysia.

Tropical rain forests contain most of the world’s plant and animal species. Unfortunately, these forests are being destroyed at an alarming rate. Economic arguments are essential to convince the custodians of these forests — primarily developing countries with rapidly growing populations — that renewable resources are more valuable than non-sustainable exploitation of the forests for wood and fuel.

Butterfly farming and ranching have demonstrated that one such renewable resource can provide economic incentives to villagers and farmers who may have to decide where to harvest firewood or clear forest for agriculture. By offering supplemental income in exchange for preserving and enhancing butterfly habitats, many plant and animal species native to tropical rain forests will indirectly benefit. Today, successful commercial butterfly farming and ranching projects are operating in North, Central and South America, Uganda, Madagascar, China, Southeast Asia, New Guinea, and Australia. Organizations like the World Wildlife Fund have included such projects in their conservation programs for countries with rich rainforest biodiversity, such as Indonesia. If carefully managed farming and ranching programs are introduced to areas with dwindling rain forests, economic incentives for conservation can play an important role in a transition to sustainable use of the earth’s most diverse ecosystems.

breedingbutterfarmingIFTApapua
Previous reading
The 6 Goliath Beetle Species and their facts
Next reading
The blue beauty, Aquamarine