What is the difference between Dragonflies and Damselflies?

So, both animal groups are insects belonging to the order Odonata (meaning toothed jaw). They are fast and skillful hunters, with an elongated body and exceptional, sometimes stunning flying skills. They both poses two pairs of wings and extremely powerful jaws with whom they catch their prey (sometimes in combination with their forelegs). In terms of color, this group of insects is extremely vivid and versatile, from monochrome variants to multicolor variants with metallic reflections. As for differences, there are few, but they are distinctly obvious. Damselflies have a narrower and elongated body, the eyes never touch each other, both pairs of wings are mutually equal in shape and in size and during resting the wings are nestled alongside their body. Dragonflies have a wider and often shorter body, the eyes are at least at one point touching each other, the hinder wings are relatively shorter compared to the front pair of wings and during resting there are not collected along the body of the individual but are held in an open position. The earliest fossil findings were estimated at about 300 million years old and it is intriguing to observe that the current descendants of these very old groups of insects have changed very little in comparison to their ancestors. 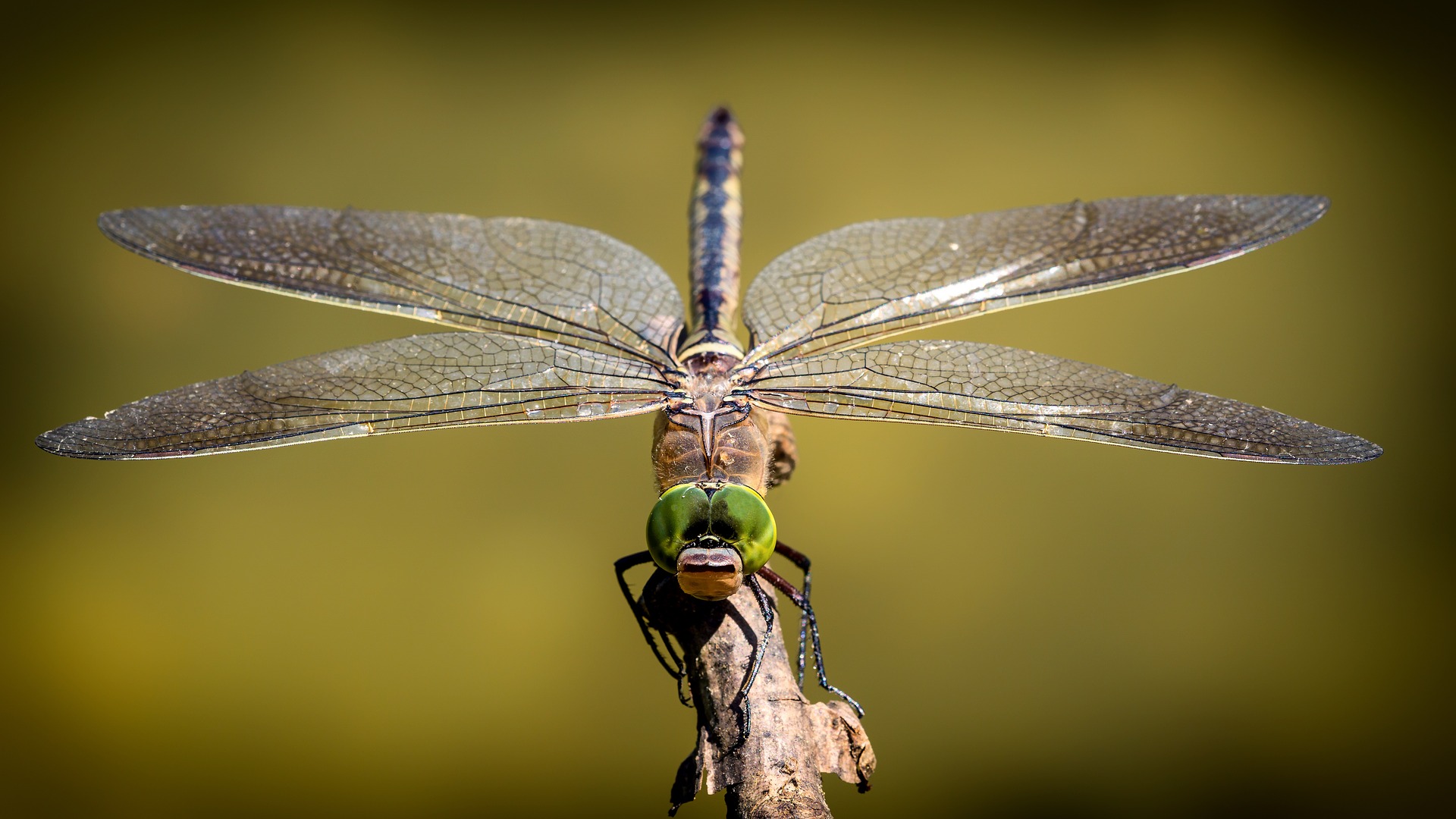 How do Odonata reproduce?

During the mating season, the male adheres to the female so that they form together a so called "mating ring". After that, the female lays fertilized eggs either in water or on vegetation near the water. After a few days, larvae emerge from the eggs, motile predatory nymphs. Nymphs through a series of molts in which it sheds their skin, come out of the water by strenuous climbing along nearby vegetation. When they climb out of the water, their adequately secure them self on the vegetation and the last but not the least transformation begins. Eventually an adult individual comes out of the discarded shell. In this instant the adult is soft and vulnerable, so the individual is now forced to wait for his wings and exoskeleton to become hard. Only then can the adult make his first flight. Depending on the species, the nymph stage can last from several weeks to up to several years. After several weeks of predatory activity, adults become fully mature and begin to find adequate reproduction sites, and thus begin the tiring searching and fighting for an adequate mating partner.

Where do Odonata live?

Dragonflies and Damselflies habitat is primarily aquatic i.e. clean water bodies (lakes, wetlands, rivers and streams) or closely related to the nearby vegetation of this water bodies. Of course, different species prefer different conditions. Some species prefer fast-flowing water, while other slow-flowing and even standing water bodies. Some species prefer water bodies of a permanent type, while others a temporary type. The preferences of puddles and ponds that are short-lived can be explained by the absence or the smaller presence of their potential predators. Of course, the shorter the lifetime of the body of water is the shorter cycle of the nymph stage, i.e. the faster the transition to an adult is. 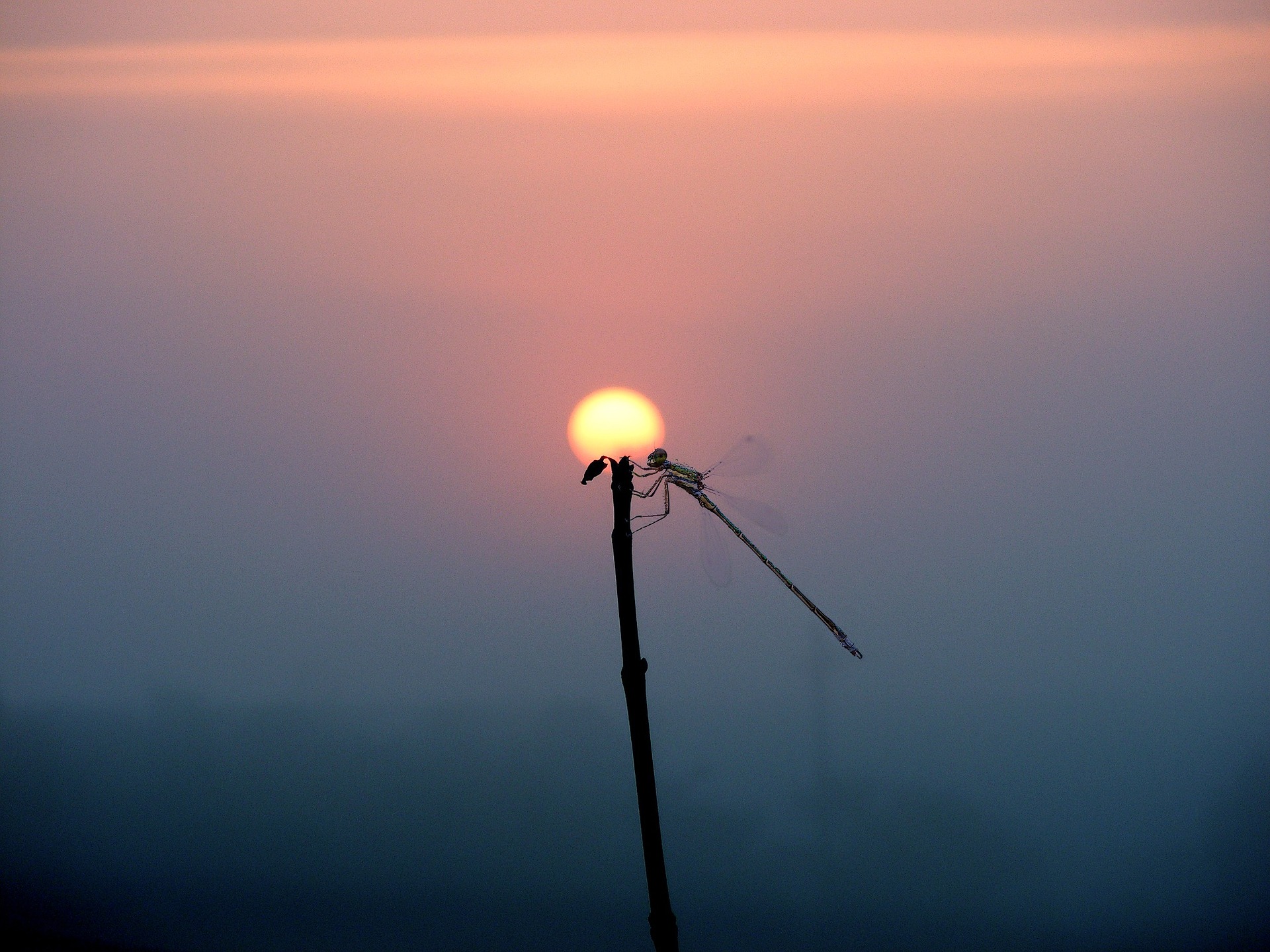 What do Odonata eat?

By the very shape of their forelegs and the mandibles, it can easily be concluded that insects from the order Odonata are exceptional predators. In the nymph stage, they feed on various insects, worms, and even smaller vertebrates such as tadpoles and smaller fish. It is interesting that during the capture of their prey the jaw from nymphs is trusted from the lower part of the head outwards, where the caught prey is then drawn to the nymph back. The mentioned hunting mechanism is so strange and striking that it has served as an inspiration in several very well-known movie films. This way of hunting, the ejection and retraction of the jaw is lost in adults. The adult's jaw by metamorphosis becomes fixed and now the strong front legs perform the capture of prey. Adult individuals mostly fed on flying insects (bees, wasps, flies, butterflies), and in some species cannibalism occurs.

How do Odonata fly?

Their ability to fly can be best explained by comparing them with a modern helicopter. They maneuver extremely precise and can fly in all 6 axes (including backwards) as well as hover in place (like a hummingbird). They are extremely fast (from 10 to 30 km/h). Of course Damselflies are much slower flyers as a result of their finer constitution. Taking into account all of the above, it's no wonder that they easily capture the most elusive (and even the peskiest) flies in midflight. While on the other hand, using their full potential during the flight, they have excellent chances of avoiding their predators when it becomes necessary. What's more, it can be said that their talents during flight is one of the features that overcame 300 million years with relative ease. It is interesting that, due to the exceptional predatory characteristics, in some regions this group of insects serves as a very effective biological control over various harmful insects (moths, flies, mosquitoes, etc.)

How do dragonflies intertwine inhuman culture?

Due to its very specific appearance and behavior, getting attention from various people was inevitable. In certain cultures, Odonata is a symbol of speed and skill, while in some it symbolizes courage, health and strength. Symbolization of health can be linked to the Odonata habitat, because they prefer extremely clean water for their development and reproduction, i.e., their absence can indicate the contamination of water, which may result in the appearance of various severe, then deadly diseases. In addition, in the course of history, various objects, jewelry, drawings and texts describing Odonata (in Egyptian, Japanese, and even native American cultures) can be found. Due to their exceptional beauty, elegance and diversity, it is quite reasonable to expect that Odonata collections exist in the same, if not in a larger scale, such as the Butterfly collections. Yet this is not the case for one natural reason. Namely, butterflies get their coloration by the presence of pigmented scales on their body, especially on the wings, while the Odonata story is quite different. In other words, because of the absence of the mentioned pigmented scales on their body, during the pining after a certain period of time the prepared specimens color is faded away and thus the insects lose their beauty, charm and determinative value. By doing so, the collections become in a short period of time worthless.

How come they did'nt change much through millions of years ?

In nature, changes in the whole species do not occur immediately, but occur randomly in the form of various individual mutations. If the mutation turns out to be more useful, only then such a change is spreading through the population. Otherwise, harmful mutations (or less useful) disappear, i.e., being pushed out of the population. From the above introduction, we can conclude that during the occurrence of Odonata, through 300 million years just an extremely small number of mutations have proved to be more useful than the original attributes and properties. In other words, from the start for more than 300 million years these insects were relatively perfect for life and survival in their environment. Even more interesting is that during the 300 million years the living conditions on the planet drastically changed in several occasions, but Odonata remained relatively unchanged. Unfortunately, after so many years of survival and struggle, they may currently face their biggest problem ever. Namely, the destruction of their natural habitats and contamination of their essential, life bringing clean waters, by human irresponsibility, stupidity and ignorance.