Megalodon was not only the biggest and baddest prehistoric shark that ever lived; it was the largest marine predator in the history of the planet. Today’s great white sharks would be a mere bite size snack for this monster. It terrorized the diverse ocean waters around the world from 15.9 to 2.6 million years ago (late Oligocene to early Pleistocene). This massive, extinct species of shark was estimated to grow to nearly 60 feet in length and has often been declared the greatest vertebrate predator which ever lived.

These mega-tooth sharks were a giant and more robust version of the great white. They had 276 teeth in 5 rows and like todays sharks shed their teeth throughout their lifetime. The largest Megalodon teeth on record reached a stagger 7.5 inches (190mm). Compare this to the largest great whites who’s teeth top out around 3 inches long. Wow.

Their teeth were bone crunching and flesh cutting tools, which evolved for grasping powerful prey such as Baleen whales. Fossil evidence supports that Megalodon focused its attack on the hard boney parts of its prey, such as rib cages, flippers, shoulders, and spines- effectively disabling large whales and harming major organs such as the heart and lungs. This strategy explains the thick, robust teeth of the Megalodon.

One of the best hotspots worldwide to find Megalodon Teeth are the rivers, creeks and the coast of South Carolina in USA.

Have a look at a great Youtube movie of Blackriverfossils where they let you join a Megalodon Teeth-hunting trip from the first row:

Off course we do have some great Megalodon Teeth in our product range. Below you can find some of them:

www.fossilera.com has created a wonderful infographic about the Megalodon, full of facts and figures like the biggest Megalodon ever, what they ate, where they lived... 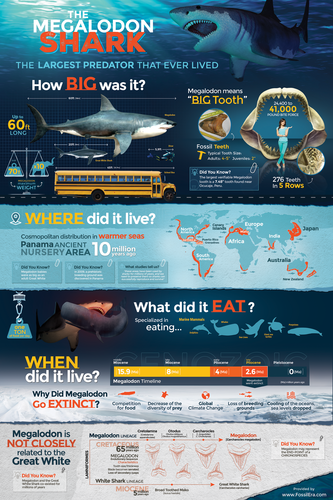 Have a look at the full infographic by clicking on the above image.

fossilsmegaldonshark
Previous reading
An intro about the Cockchafer (May-bug)
Next reading
Who was Ernst Haeckel?