However, for those that are forest inhabitants, communication among conspecifics and sympatrics seems to be dominated by vocalisations or calls. A number of hornbill species have elaborate calls and displays that precede breeding and these may be important in tightening the bond between members of a new pair or renewing the bond between established pairs.

However, often the same or similar displays serve in territorial defense during the rest of the year, especially for those species that are sedentary and maintain year-round home ranges. This makes it difficult to know exactly what proportion of the communications signal spatial defense versus pair-bonding. For example, adult ground-hornbills in a group utter their deep booming calls at dawn every day of the year, but the different pitches of males and females also signal the sexual composition of the group.

Similarly, a male Great Hornbill leads with loud normal calls every morning throughout the year, but outside the breeding season the female normally joins in with duet calls. Since hornbills are long-lived, changes in pair members are probably rare, so this calling is probably a signal by both sexes of occupancy of their strictly defined territory, as revealed by immediate “invasions’ as soon as a member of a pair or group fails to call one morning. 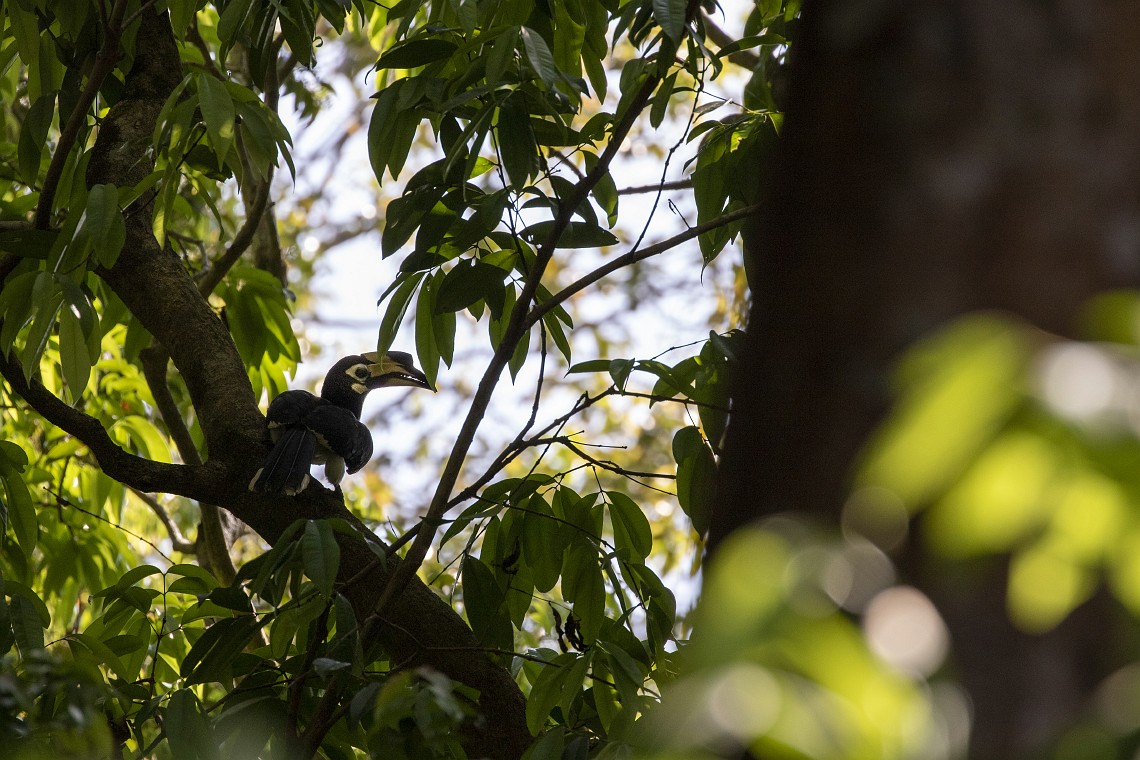 In the breeding season, after the female has imprisoned herself, vocal communication between the mates predominates over visual communication. For instance, a number of breeding males of Great, Wreathed, White-throated Brown and Oriental Pied Hornbills utter calls when they enter the nest area, females usually calling back. This may signal that it is safe for the male to come to the nest.

Females are often heard calling for her mate as well. Besides vocal communication, noises produced by the male’s whooshing flight can signal the chick to be alert and start making begging calls. On several occasions at Great Hornbill nests, if the father quietly sneaks in to perch in front of the nest without the sound of wing-beats, it is often threatened by aggressive roaring calls by the chick. In this case, the chick will calm down and accept the food after recognising its father visually. The chick was observed to refuse the food fed by a stranger by throwing out such food.

Elaborate calls and visual displays are also common in Tockus hornbills, while they do play a role in territorial proclamation throughout the year, they are much more frequent in the build-up to nesting when pair-bonding is important. Most other hornbill species also call together as pairs or groups, but few have any remarkable display activities, probably because they are birds of dense forests where visual signals are least effective. Several jerk their heads back as they call, like the Wreathed Hornbill, and others raise the bill skywards as they call, like Rhinoceros and Great Hornbills. The Rufous-necked Hornbill will jerk its tail up at the end of calling, and maybe most spectacular of all is the Helmeted Hornbill which sometimes progress from calling to casque-butting with other individuals at perch or in flight.