Topaz Mountain is located on the southern end of the Thomas Range. This range is very popular to rock collecting enthusiasts. Topaz, Utah’s state gem; is a semiprecious gemstone that occurs as very hard transparent crystals in a variety of colors. The Topaz crystals at Topaz Mountain are naturally amber colored, but become colorless after exposed to sunlight.

It lies on publicly owned land managed by the Bureau of Land Management (BLM). Collection of rocks and mineral is permitted there and, as a result, the area is frequented by amateur and professional rock hounds.

The crystals formed within cavities of the Topaz Mountain Rhyolit, a volcanic rock which erupted approximately six to seven million years ago (Tertiary Period) from volcanic vents along faults in the area. Clear Topaz can be seen glittering in the sunlight all over the ground. 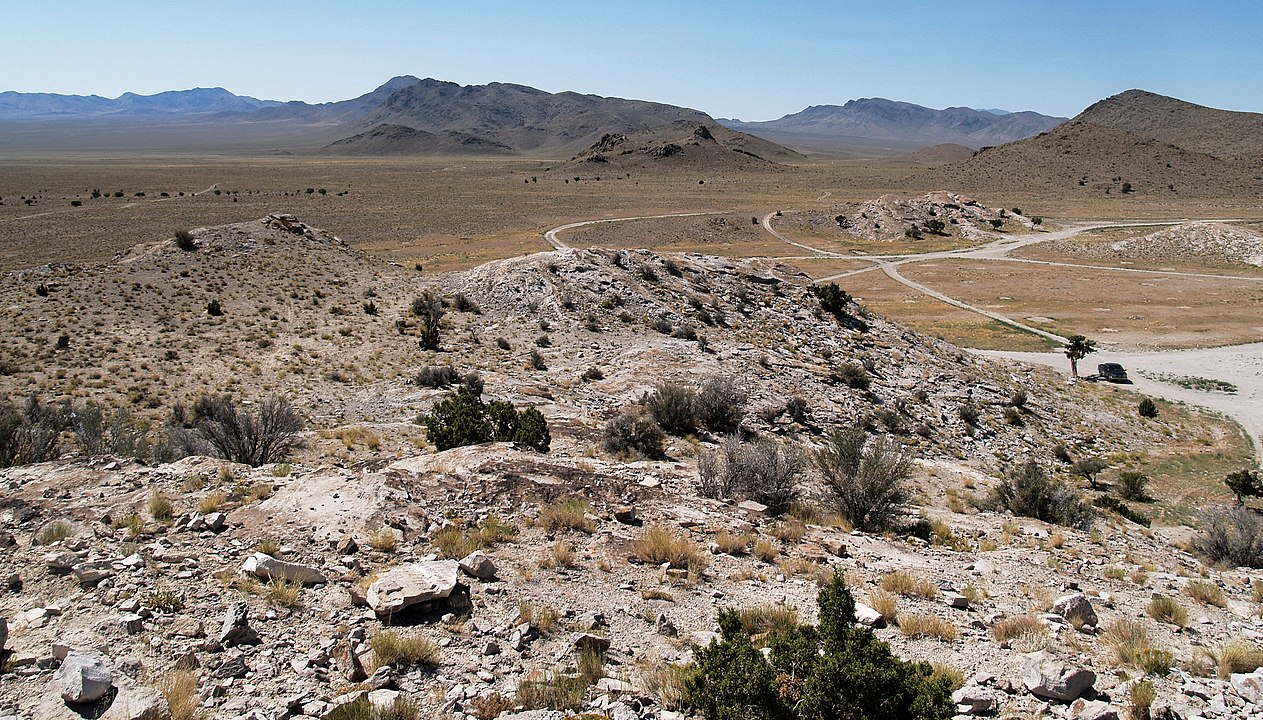 Washes are a great place to find clear Topaz. But if you’re looking to find the more sought after amber colored Topaz you will have to do a little work. You want to search for bushes or any other kind of vegetation growing out of the cracks in the Rhyolite, this is a sign of weakness in the rock, and is usually a great location to find Topaz. Probe these areas with your screwdriver to find soft spots that may lead you to a pocket containing amber colored Topaz.

There are several areas within Topaz mountain available for easy collecting of clear Topaz, you may also chance upon small amber colored Topaz that has been overlooked by the serious rock hound. We have visited Topaz Mountain several times, it always seems to be a big hit with the kids. Where else can they dig in the dirt with out getting in trouble, and come out with a bag of treasures to boot.

Topaz is a semiprecious gemstone that occurs as very hard, transparent crystals in a variety of colors. It is naturally amber-colored, but becomes colorless after exposure to sunlight. Topaz forms within cavities of the volcanic rock rhyolite, from eruptions that occurred during the Tertiary Period six to seven million years ago. Topaz is embedded in the rhyolite rock, and also found loose on the slopes and arroyos.

The earliest reports on geology of the Thomas and Dugway Ranges are by Henry Engelmann, geologist for Captain J. H. Simpson’s expedition across the Great Basin in 1859 (Simpson, 1876, p. 325-326), and by G.K. Gilbert (1875, p. 27, 119), attached to Lieutenant G. M. Wheeler’s survey west of the 100th meridian. Engelmann briefly discussed the topaz from the Thomas Range; Gilbert., who went through Dugway Pass, mentioned the volcanic rocks and Paleozoic sedimentary rocks in the vicinity. (Staatz and Carr, 1964)

The discovery of fluorspar on Spor Mountain in 1936 eventually attracted considerable attention to that part of the Thomas Range. Between 1948 and 1950 the geology of this area was studied and some of the aRea mapped by W.P. Fuller for North Lily Mining Co., J. J. Beeson for Geneva Steel Co., and James Quigley for Chief Consolidated Mining Co. (Staatz and Carr, 1964)

History would not be complete without the mention of Maynard Bixby. Born in Pennsylvania to a storekeeper and his wife in 1853, he graduated from Lafayette College in 1876. In the early 1890s Maynard moved to Utah after his involvement, among other things, in mining activities in Colorado and Arizona.

Maynard spent considerable time prospecting the Thomas Range in Utah, staking numerous claims. Today, one of his claims, the Maynard Claim, is still a source of fine topaz crystals. Maynard is known for his discovery in 1904 of bixbyite and bixbite (a variety of red beryl). However, the bixbite was discredited since it sounded too much like bixbyite and is now referred to only as red beryl. Maynard died in 1935 after a notable legacy that included the discoveries discussed above, numerous articles and a book in 1902 titled “A Catalogue of Utah Minerals and Localities”.

Topaz Valley is one place in the Topaz Mountain area that has been mostly set aside by the BLM for hand collecting. Though much of the surface topaz has been collected over the years, some can still be found as it weathers out or by digging below the surface. However, good quality sherry-colored topaz crystals, for the most part, must be located by searching for pockets within the light gray rhyolite. Here they are found attached to the sides of the cavities as well as loose within them, often coated with a soft, clay-like material. However, if not protected from the sunlight, the topaz bleach, irreversibly, very rapidly from sherry to clear within a day when exposed to direct sunlight.

Collector’s Edge began mining on October 1, 2009 and continued through mid-December.   Following are photos of the operation and some of the topaz found during this effort.