What is Petrified Wood?

Petrified wood is the fossilization of plant materials, mainly woody stems, trunks, and roots. When a freshly toppled tree is covered with ash or other oxygen-depriving materials, the process of decomposition is halted. Instead, the process of permineralization slowly replaces the organic constituents over time. After millions of years, movements in the tectonic plates, changes in weather patterns, or variations in erosion eventually uncover these stone trees.

Now made of inorganic minerals, they still perfectly model the original plant down to the level of individual cells. Because of this mineralized documentation of the living organism, petrified wood represents an excellent source for scientists to get information about historical plant species which dominated the ecosystem. Specifically, scientists can match the petrified wood to extant relatives based on cellular morphology.

Using this information, scientists can then determine what the ecosystem must have been like based on which types of trees and other flora were the most common. Further, petrified wood can show the migration and morphological changes which have taken place in various genealogies of plants throughout evolutionary history. Not only does petrified wood provide science with vast amounts of information, but it is beautiful and fascinating at the same time. 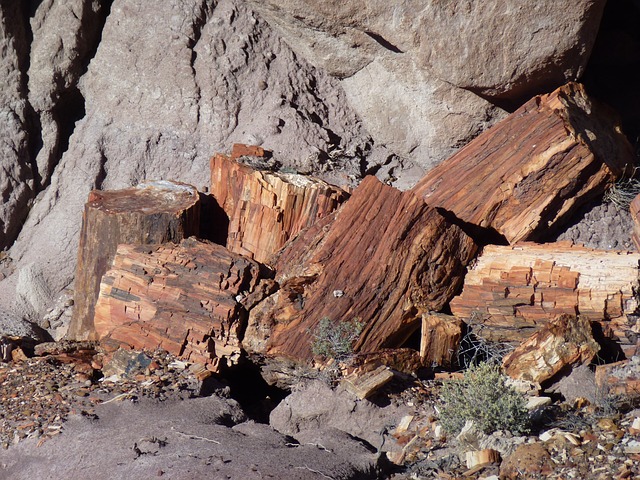 Where is Petrified Wood Found in Indonesia?

Indonesia is one of the world’s major markets of petrified wood, coming mainly from areas like Banten and Mount Halimun Salak National Park. Abundant amounts of petrified wood have been found in these areas, and have sparked a large industry of exporting petrified wood samples to researchers and collectors. Some of the pieces are massive, from extinct tree species that may or may not have extant relatives.

These areas are often called petrified forests because of the large amount of petrified wood in the areas. Petrified forests can be created by several conditions, but are great at accurately preserving the biological history of the world. One study, for instance, found 20 different species in the petrified woods of Khorat Plateau from 5 different families. Commonly, these petrified forests are found in tuff deposits, ancient ash left from the eruption of a volcano.

What Caused the Petrified Forests of Indonesia?

The evidence of how many of these petrified forests were formed is found in where they exist now. The tuff deposits that surround many petrified forests are the remains of a massive deposit of ash from a volcano. Sometimes, the ash would pile so high from these events that it would completely bury large sections of forest. Much of the petrified wood in these areas can still be found in a growing position, as has been recorded by many scientists.

As has been shown by several studies, the ash creates an area absent of oxygen, which massively stops the process of decomposition. Then, silica and other inorganic molecules slowly start to bind to the cell walls of the plant. The minerals start to crystallize and naturally accumulate until they fill the entire cell. Eventually, the organic molecules all degrade away and are completely replaced by silica and other minerals.

But, that is not the only way petrified wood was created in Indonesia. Much of Indonesia has had a tropical or subtropical climate for most of its existence. As such, there are also a number of swamps, deltas, and wet areas where anaerobic conditions persist. Anaerobic conditions (conditions without oxygen) often happen in stagnant, warm water sources and also create ideal conditions for permineralization.

Thus, petrified forests are also often found in claystone which is essentially the dried and aged remains of the bottom of the swamp. Between these two sources, scientists have been able to piece together a picture of what Indonesia looked like in pre-history, and how species migrated and changed over time.

What Can Petrified Forests Tell Us about Indonesia?

Petrified wood and the petrified forests it is often found in can tell us a great deal about the historical ecology of a certain environment. In general, the evidence from Indonesia paints a picture of a volatile and erratic history. Indonesia is right at the confluence of four tectonic plates, the Eurasian plate, the Australian plate, the Philippine Sea plate and the Pacific plate.

This massive interaction of tectonic plates also led to one of the planet’s most volcanically active areas. The fossil record in these areas, created in part by the ash the volcanoes spewed out, is rich and informative about which species were present, and approximately when. As these plates collided over time, their landmasses have exchanged many flora and fauna, creating a confusing and dynamic history. Petrified wood gives us one of the best views of this historical exchange. Luckily, Indonesia has one of the largest deposits of petrified wood in the world coming mainly from drastic volcanic activity and flooding around 20 million years ago.

For instance, the petrified wood forests of Indonesia provide important evidence of floral exchange that took place when the Indian and Burmese tectonic plates met 23 million years ago. Scientists studying the historical vegetation and climate of these areas have shown that many species were transferred from Indonesia into India and China as these tectonic plates met by comparing petrified wood in the various locations. The scientists could compare not only the large morphological characteristics, but they could also compare the cell structure, tissue composition, and vasculature of the petrified wood to modern plants.

The petrified forests of Indonesia also suggest that the environment 20 million years ago was largely tropical, and apparently very swampy in places. The landscape was dominated by trees that were very similar to various conifers seen today, as well as gymnosperms with living extant relatives. However, large numbers of mollusk fossils and other marine creatures also suggest that much of Indonesia was underwater or still being formed by volcanoes, Indonesia consisting of more than 17,000 islands. The volcanoes and low-level swampy areas provide perfect conditions for preserving the terrestrial plant life into petrified wood and other plant fossils.

What Can a Piece of Petrified Wood Show?

Besides the vast analyses of fossil records and broad-stroke visualizations of what petrified forests and fossils can tell us about evolutionary history, petrified wood from Indonesia can tell even a casual observer many things about the organism it replaced.

Just like scientists observe dinosaur fossils to understand how dinosaurs lived, similar information can be derived from petrified wood. Most petrified wood comes from vascular plants, and using microscopes and scanning electron micrographs, scientists have been able to distinguish the different cell types of xylem and phloem that helped distribute water and nutrients to the different parts of the plant. With this, they could compare the cell structure and tissue arrangement of the petrified wood to modern plants to understand how the ancient plants grew and obtained nutrients.

Don’t have a scanning electron microscope? No worries! There is still plenty of things that you can learn from a piece of petrified wood without any magnification. First, a good specimen of petrified wood will still have growth rings present. These rings can be counted to estimate the number of different seasons the tree lived through, giving a rough estimate of how long the tree lived. Further, measurements of the diameter of the petrified wood can allow you to estimate the overall size of the tree, based on its modern relatives and their height-to-width ratio.