Mimicry is a phenomenon where the appearance of an individual is very similar to another individual organism. This phenomenon is apparent between individuals of the same species; between very close species, for example, between certain types of butterflies; as well as between unrelated species, for example, among some species of insects that are similar to the vegetation in their surroundings. It is also very interesting that some plants exhibit mimicry of the kinds of insects that most often pollinate them. In addition to the mimicry of the outer appearance of the organism, there is also the mimicry of smell, behavior mimicry and acoustic mimicry.

Life in nature can be reduced to only one thing, the struggle for survival. This struggle for survival is most important for prey, when a predator encounters it. In scientific works about survival, the mechanism of "fight-or-flight" is most frequently mentioned. Over the course of millions and millions of years, nature has found another additional solution to the problem of survival. If the predator does not recognize his prey at that particular moment as prey, but something else that is to him of no interest. In such a way, prey reduces the risk of injury and potential death, because it does not need to fight for his life. Additionally, the prey reduces unnecessary wastage of biological resources, as it is not physically active as during flight, it just stands still in place. As one of the extreme cases of resource allocation is the rejection of the lizards tail during its escape from the predator. After a successful escape, the lizard needs additional nutrition to compensate for body weight that it is lost through the rejection of the tail. In addition to defensive mimicry, there is also mimicry for the purpose of attack. Namely, certain types of predators use mimicry to come closer and closer to their prey, with makes them much easier to catch. One such example is an ant-spider that looks like an ant species that it feeds on. Depending on the role, we can divide mimicry into defensive, aggressive and reproductive.

How did mimicry in insects evolve?

Mimicry was created in the same way as all the other characteristics of any organism, i.e. through multiple evolutionary processes. In other words, by random mutations and their natural selection. First, we need to keep in mind that these mutations can potentially have a deadly outcome for the organism. Next, the offspring will inherit only those mutations that not only are not lethal but also assisted their parents during survival. This inheritance is repeated over a number of years (over thousands maybe millions of generations) until a population of adequate size is created and thus a new species is formed that is characterized by this mutation. For example, in mutations that look similar to plants, mutations have randomly appeared which have the body-color similar to a plant (its leaf or tree branch). In addition, mutations that have the effect of changing body shape (length, width, symmetry etc.) have randomly appeared (modifying the organisms body) and thus in combination with other genes the organism body closely resembles some parts of the plant's body in his environment.

When did mimicry in insects evolved?

Questions as “when some kind of characteristic and even some entire species came about?” we can only get through a detailed analysis of their fossils. In the case of mimicry in insects, the scientists found the answer by studying fossils of their ancestors. The scientists have concluded that their ancestors possessed mimicry and used this survival mechanism for some 125 million years, even before the emergence of flowering plants. During time, when the insects inhabited vegetation changed, their also slowly changed and adapted, or got extinct.

What insect species use mimicry?

Bearing in mind that some scientists estimate there are about 10 million insects on planet Earth, it is quite logical to expect that there are more than a thousand species of insects surviving with the help of mimicry. One such example are some species of flies (hoverflies), who with their shape and color of body are strikingly similar to bees and wasps. In this way, the predators avoid them, not because they hate flies, but because they want to avoid being painfully stringed by a bee or wasp. Most famous and interesting types of insects that use mimicry to its fullest potential are the leaf and stick insects. 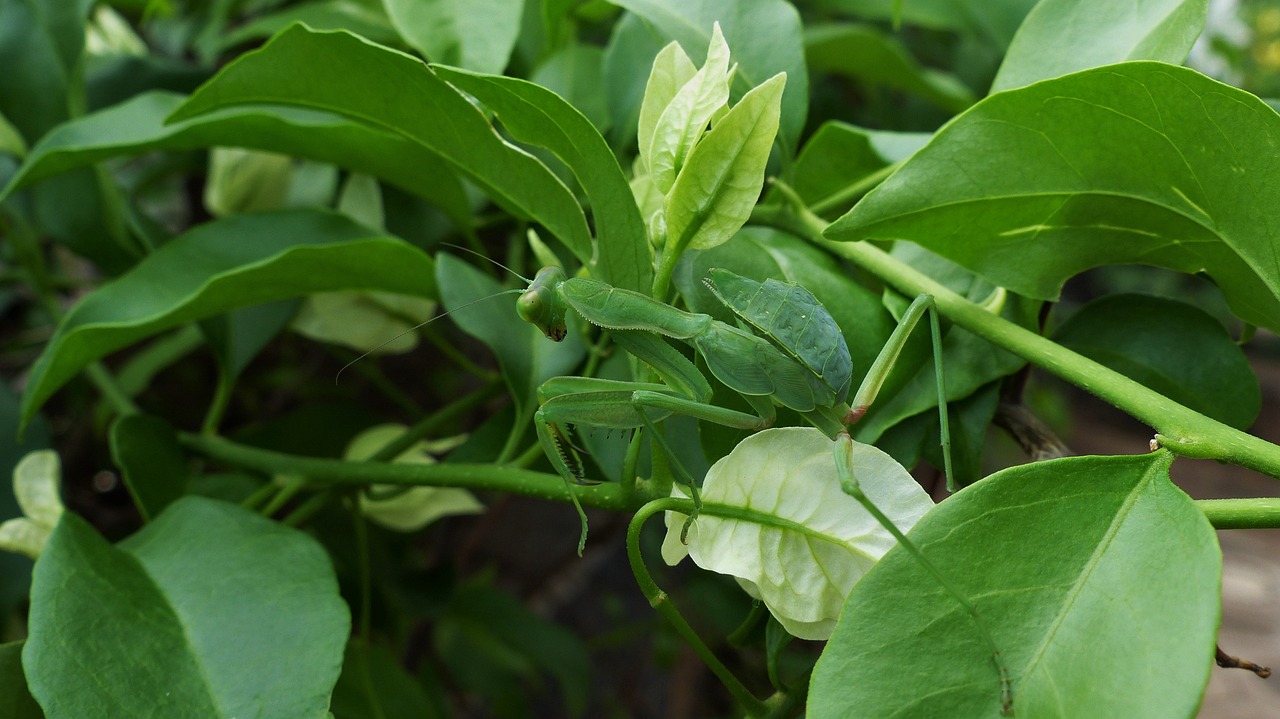 What is the price insects pay for having a mimicry strategy for survival?

In nature everything has its own price, even natural adaptations that are of great importance for the survival of the species. In other words, evolution works with the principle "you have to lose something, to get something". This can be most easily seen on the leaf or stick insects. Namely, due to the drastic changes in their bodies and behavior, in order to become less vulnerable in the natural environment for predators, these species have in most cases lost their ability to fly. Logical, now their chance of finding an adequate mating partner is extremely difficult. Because of the previous mentioned difficulties the survival of the species is at now at risk. Never the les, this kind of insects solved the problem by having a parthenogenic type of reproduction. In other words, females can lay eggs that are not fertilized, and form the unfertilized eggs will still hatch the new generation. Of course, females will always prefer finding a male to fertilize their eggs for the purpose of recombination of their genetic material.

Leaf insects or walking leaves fall into the family of Phylliidae. It is characteristic for them that they imitate leafs, both by color and by the shape of their body. It is quite interesting that certain leaf species adapted their movements so much, so that they imitate leafs moved by the wind. Depending on their natural habitat, i.e. the types of plants that they surround, they may have different body shapes. Some species have such a shape that they resemble leaves eaten by some other insects. As for the color of the body, there are differences depending on the vegetation that dominate in their surroundings. The colors range from dark and light green to brown and yellow-orange color imitating leaves at different stages of vegetation. One of the oldest fossils of Eophyllium messelensis (ancestor of the current leaf insects) was found in Germany. The age of the fossil is estimated to be around 47 million years ago (the Eocene epic in the Cenozoic era). Considering these facts, nowadays leaf bugs have changed remarkably little in relation to their ancestors. This is more than expected, given the fact that habitats changed also very little. Today's species of leaf bugs (50 species) can be found in South Asia, South East Asia and Australia. Interestingly, because of the natural selection for this insect species to look similar to leaves, their wings have mostly just a visual function. In other words, the majority of the leaf bugs cannot fly. 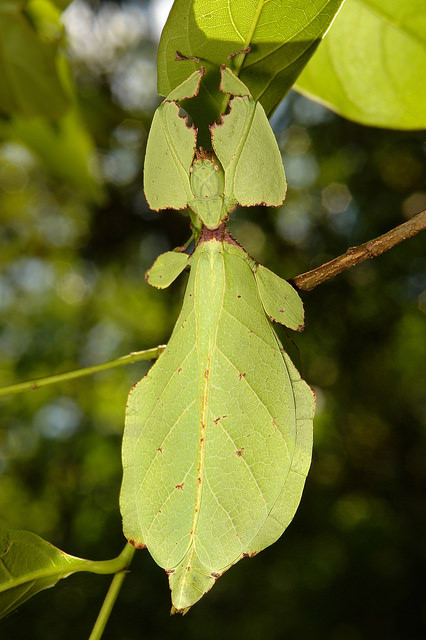 In addition to the leaf bugs, there is another well-known group of insects who use mimicry. These are the so-called stick insects. Stick bugs or walking sticks fall into the order of Phasmid with a large number of families. It is characteristic for them that these species of insects imitate the branches of the surrounding vegetation, both by color and by body. Their body-color moves from green to gray and brown. Nowadays, about 3,000 species of stick bugs are known and can be found in all places, except for Antarctica and Patagonia. It is interesting to note that some varieties have adapted to life on the thorny vegetation, by having thorn-like growths on their bodies. This additional adaptation gives them additional protection from predators. Interestingly, some species have growths on their bodies that mimic moss and lichen. As with the leaf bugs, the most stick bugs do not have functional wings, and are therefore not in a position to traverse large distances.